To help you get some inspiration for your new bathroom space, we’ve put together a guide to some of our small bathroom designs with a shower and explained why they work in terms of making the most of the space. 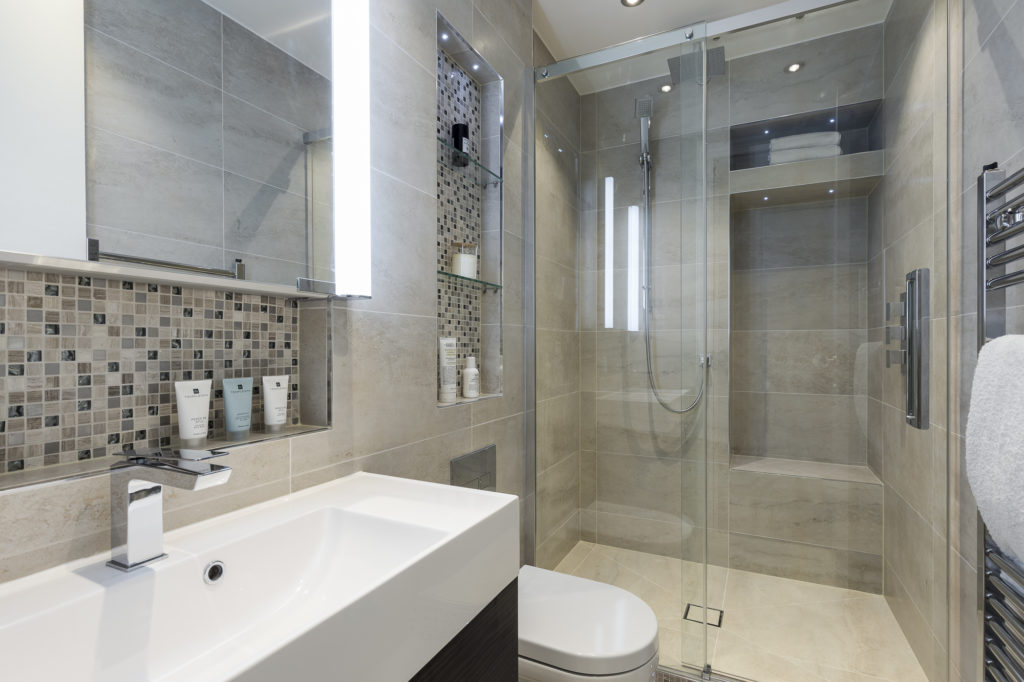 For this design, we replaced the bath and created a shower that was large enough to feel spacious but didn’t overwhelm the small bathroom. We choose to fix the shower valve on the right-hand side, away from the shower head and close to the sliding door, so that shower could be turned on before stepping in. The shower head offers a waterfall-type overhead spray, but can also be detached for an easier showering experience.

The glass sliding shower doors are frameless, which looks more sleek and elegant and makes the space appear larger. At the back wall, we added some additional storage space, which can be used during the shower for storing toiletries. We also opted for a discreet tile insert shower drain which blended in more seamlessly with the overall design. 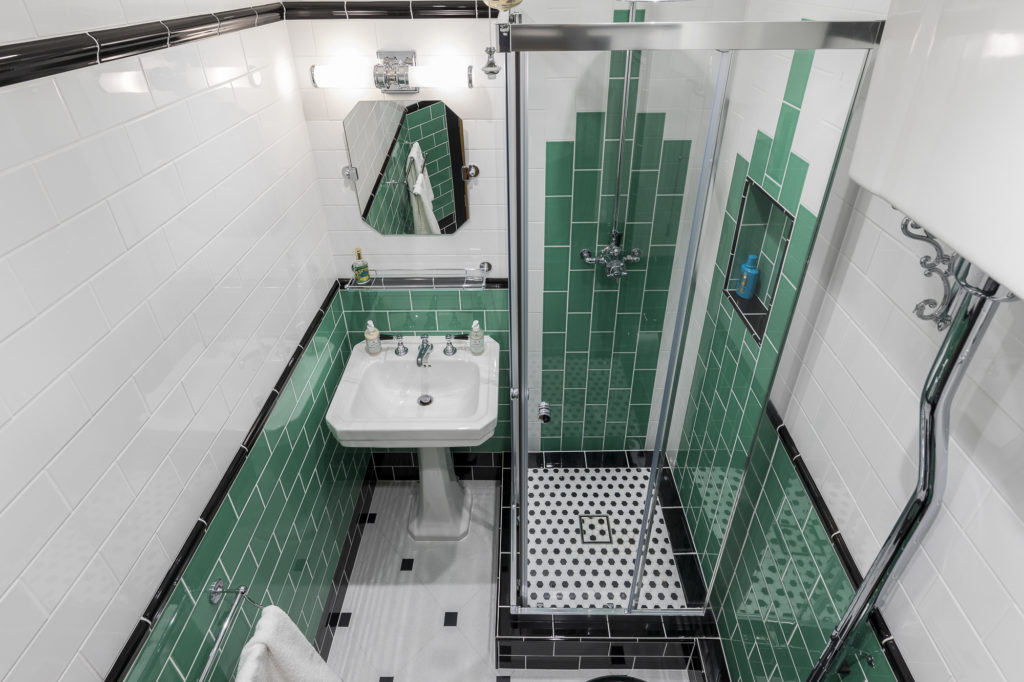 When working on this small bathroom space, we needed to figure out a way to incorporate the shower alongside the basin and toilet without compromising on the design. This bathroom demonstrates more traditional elements compared to some of our other bathrooms, and we love the tap detailing for the shower valve.

Since the striking tile patterns were such a prominent feature in this bathroom, we chose to extend the design into the shower to create a sense of continuity. Again, we chose a tile insert shower drain instead of a traditional metal one to create a cleaner and more coherent finish. We also included a wall niche with continued tiling to create a handy storage space for shampoo and shower gel! 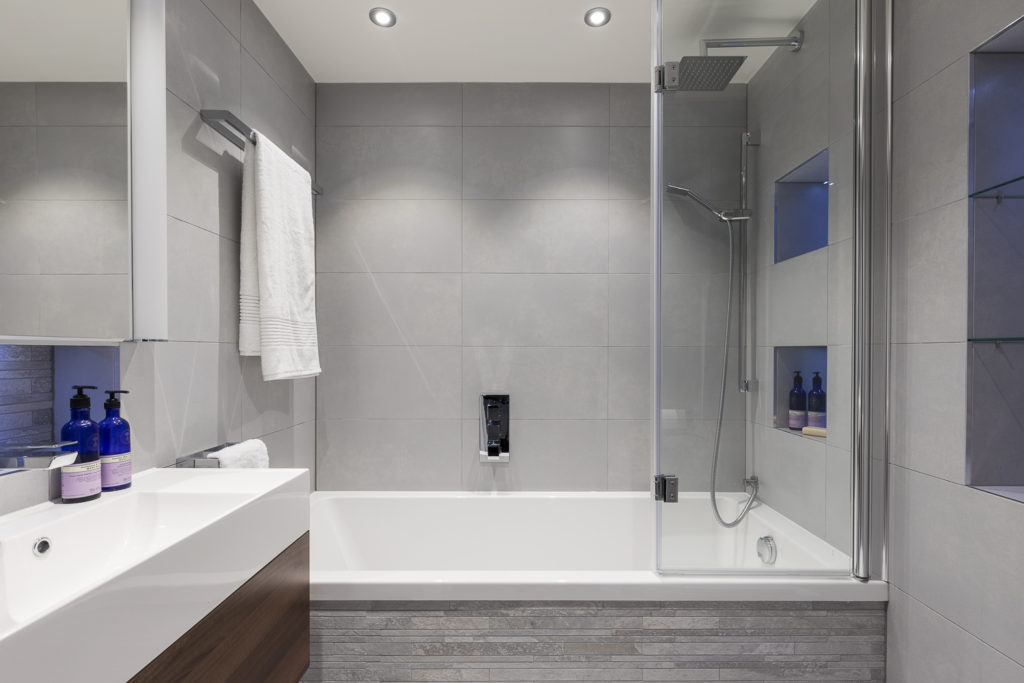 For this small bathroom design, we needed to create an over-bath shower which still looked modern and stylish. The location of the shower valve in the middle, rather than at the side, means it can be easily turned on and adjusted to the correct temperature before stepping into the shower. In terms of shower heads, we opted for a waterfall style and a traditional detachable hose so that there are different options for using the shower.

The shower screen is minimalist and discrete and placing a towel rail near the end of the shower means that the wall space can be utilised without the towel getting wet. As well as this, we included two carefully-spaced niches in the shower design, opening up valuable additional storage space in place of a wire basket. 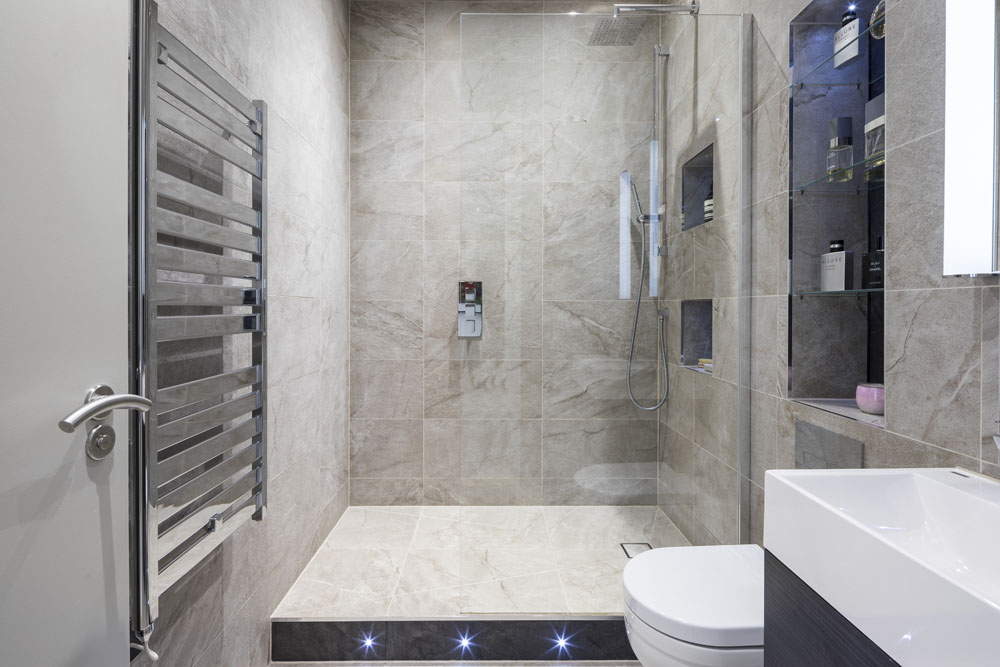 When it comes to small bathroom designs, many people are concerned about how the shower will fit while still remaining spacious and comfortable enough. A walk-in shower, as shown above, incorporates the shower as part of the space, rather than installing a full enclosure that can appear as an afterthought.

Since we were working with a concrete floor, the shower was installed on a raised plinth but the tiling still blends seamlessly with the overall design. As above, this design includes options for the waterfall shower head and the detachable hand set. 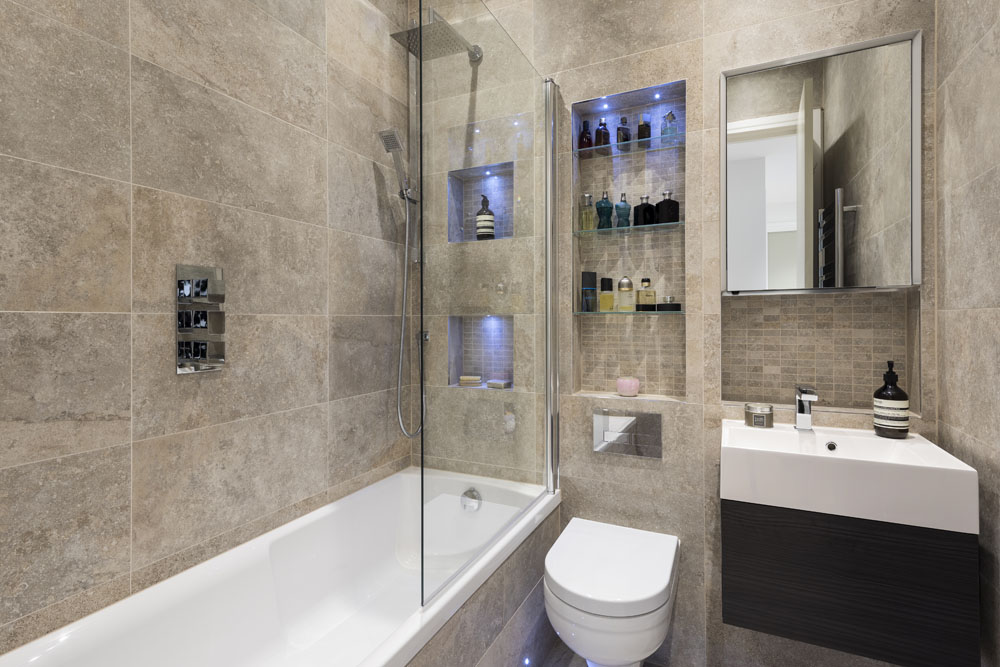 The second over-bath shower design in this collection features illuminated niches in the shower area for shampoo and soap and above the WC for storing toiletries. These add an element of interest (as well as some extra light!) and the niches have accent tiling, which makes them an aesthetic feature as well as being practical.

The sleek silver shower valve can be operated from outside of the shower for a more pleasant experience and, as with some of our other designs, you have the option between the waterfall shower head and the detachable hose. This allows it to function as both a shower and a bath.

We hope this selection of shower design ideas for small bathrooms has been inspirational and given you some things to think about for your own small bathroom or en suite!

If you like the look of our designs, take a look at our full design and installation for small bathrooms or get in touch with us for more details.

0Shares
About the author

Stay up to date with the latest trends as you browse through our bathroom design ideas and inspiration. From space-saving solutions for small bathrooms to new styles you’ll want to consider for your home, there’s something for everyone here.

Check out our bathroom design ideas feed. We are constantly updating it with information and ideas on the latest trends in modern bathrooms so make sure to keep an eye out for new blogs!